Those interested in Apple (NASDAQ:AAPL) have had to read between the lines to discern what it thinks of the metaverse and how it’s positioning itself to thrive in the space. Apple has not been as public about its enthusiasm for the metaverse as other tech companies; notably, Meta Platforms (NASDAQ:FB), formerly known as Facebook, changed its name to show just how excited it was about the new category.

Fortunately, investors got a further glimpse into Apple’s thoughts about the metaverse during the company’s fiscal-year 2022 first-quarter conference call on Jan. 27. 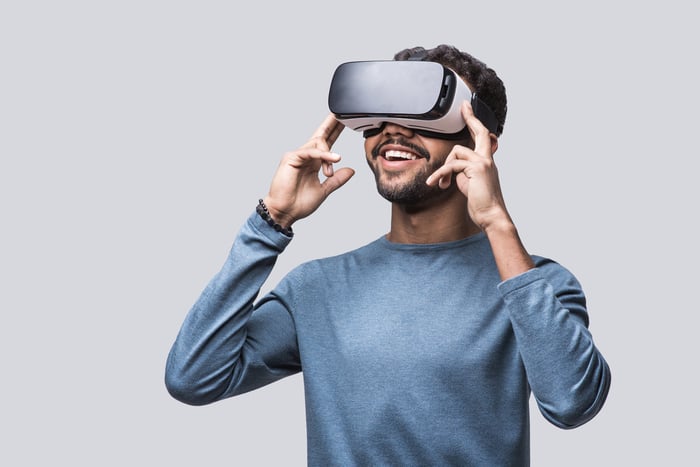 Apple has a massive research and development budget

Meta Platforms can arguably be credited for bringing fame to the metaverse. Its grand announcement, during a quarterly investor release, surprised many due to the magnitude of its commitment. Meta said it would invest $10 billion in building its metaverse in 2021 and likely even more in the following years. That level of spending can give rise to a vibrant network of developers who create products and experiences designed to entice people to join. It’s no surprise, then, that “metaverse” has become a popular buzzword since the announcement.

The term is used to describe an environment where people can virtually interact with each other and their surroundings. Of course, the degree of enjoyment and feeling of immersiveness can vary depending on the hardware used to access the metaverse. Wearing a virtual reality headset will feel much more realistic than joining through your computer. That’s where Apple has the potential to thrive; the intersection between hardware and software is where it dominates. Creating reliable hardware that connects people to the metaverse, and perhaps the software too, could be a lucrative opportunity.

During the first-quarter 2022 conference call, management was asked about its thoughts on the metaverse. CEO Tim Cook responded: “Right now, we have over 14,000 AR [augmented reality] kit apps in the App Store, which provide incredible AR experiences for millions of people today. And so we see a lot of potential in this space and are investing accordingly.”

To me, the critical part of that statement is “investing accordingly.” In the quarter ended Dec. 25, Apple invested $6.3 billion in research and development (R&D); annualized, that would total over $25 billion. Suppose that Cook said Apple is investing accordingly and sees a lot of potential in this space; in that case, there would be plenty of room within that $25 billion R&D budget to create some fantastic products.

What this could mean for shareholders

Already, Apple boasts an installed base of 1.8 billion devices. Within that total, some people own multiple Apple devices. My household may be an overrepresentation, as we have six: two iPhones, two MacBooks, and two iPads. What’s more, consumers rate Apple’s products highly. According to the latest survey by 451 Research, iPhone users indicate 98% satisfaction with their devices.

That customer satisfaction and trust level could lead Apple’s devices that connect to the metaverse to be top choices among consumers. It certainly wouldn’t be beyond Apple to create another innovative product that sells millions of units and generates billions of dollars in sales and profits.

This article represents the opinion of the writer, who may disagree with the “official” recommendation position of a Motley Fool premium advisory service. We’re motley! Questioning an investing thesis — even one of our own — helps us all think critically about investing and make decisions that help us become smarter, happier, and richer.