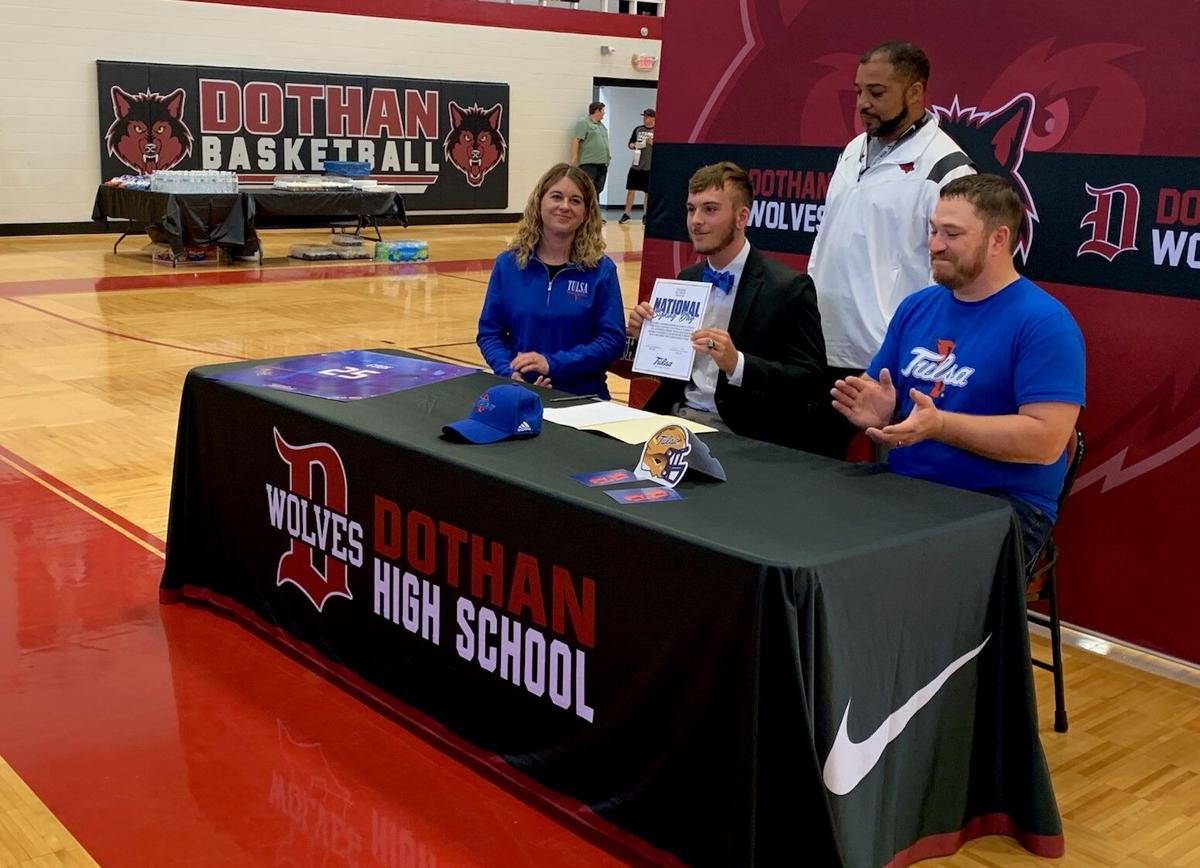 Dothan Wolves senior Conner Cook holds up his national letter of intent Thursday after signing to play with Tulsa University. Conner signed to play as a long snapper. 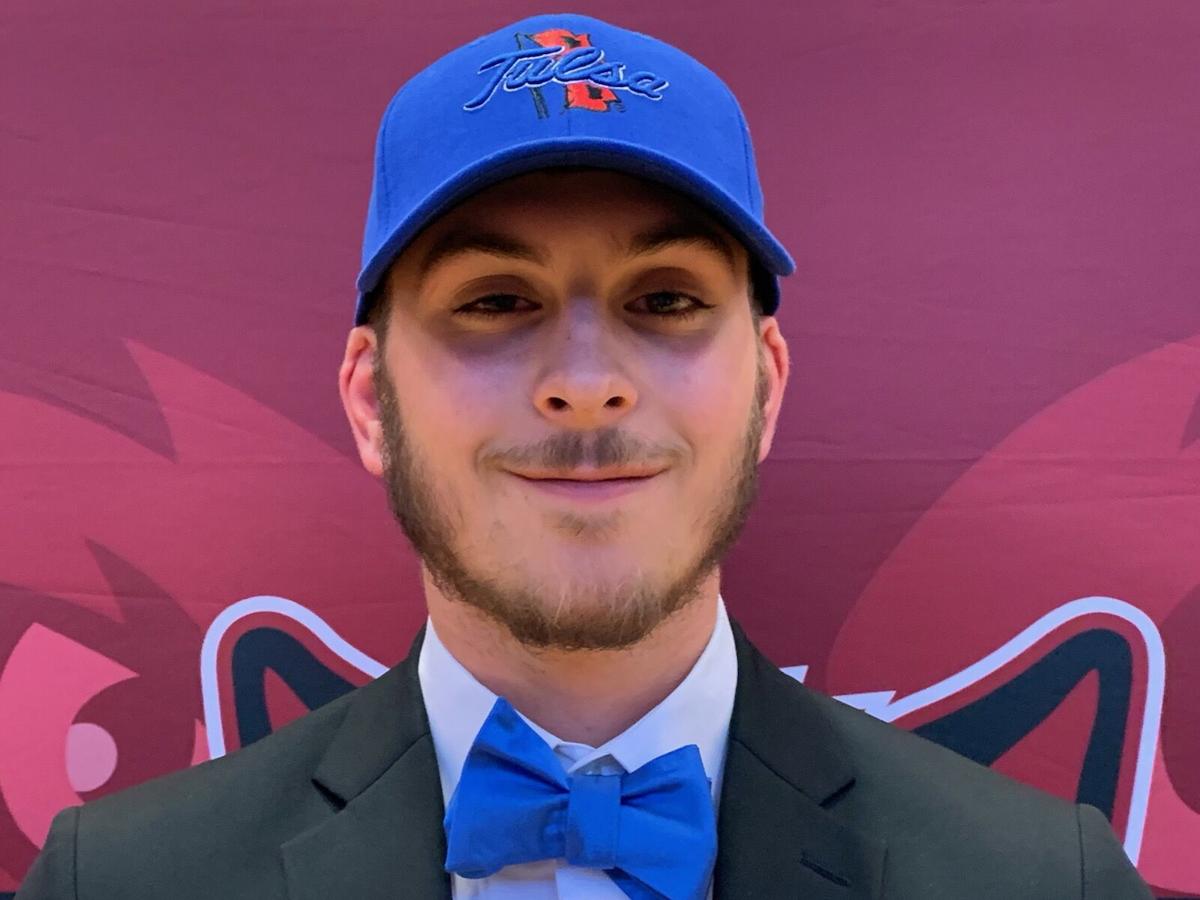 It didn’t take too long for Conner Cook to impress Dothan High coaches as a long snapper for punts and extra-point kicks.

It also didn’t take long for Tulsa University coaches to see Cook’s talent at the valuable, but underappreciated role of deep snapper.

After seeing a Facebook post two weeks ago about Cook, Tulsa coaches looked into video of the Dothan Wolves senior and quickly offered a scholarship.

On Wednesday morning, less than five minutes after players could sign football scholarships, the 6-foot-2, 195-pound Cook, with his parents by his side, signed to play for the Golden Hurricane of the American Athletic Conference. He held a signing ceremony party at the Dothan High gym with family and friends on Thursday.

“This all has felt like an early Christmas,” Cook said.

Noting that long snappers normally don’t get scholarship opportunities, Cook expressed gratefulness for his opportunity at Tulsa, which is playing in the Myrtle Beach Bowl on Monday.

“It means a lot because I had to work really hard to get this,” Cook said. “Most snappers when they go to Division I have to walk on, so to get a full scholarship shows that my work has paid off. It means a lot to me and my family and to my coaches.”

Cook, who also played linebacker at Dothan, has only had two years of snapping experience, but consistently trained with local special teams coach Brian Jackson and nationally known special teams coach Jeff Garner. He also went to numerous camps to hone his craft.

It all began just days after Dothan’s 2019 season under head coach Smitty Grider came to an end.

“After my sophomore year ended, we were looking at the depth chart after that big senior class left and we were like, there is nobody to long snap,” Cook recalled.

Since then Cook has put in a lot of time and a lot of miles in to try and improve his skills.

“I traveled all over the east side of the country and way up to Indiana and Ohio, going to camps, getting training and going to other colleges,” Cook said. “It showed me what it would take to make it.”

Interestingly, the interest from Tulsa came late after Cook posted on Facebook and Twitter on Dec. 1 that he received an offer from the Southwest Assembly of God University in Waxahachie, Texas.

“It is kind of funny,” Cook said. “A coach’s wife (at Tulsa) saw my other offer that I got a few weeks ago on Facebook. She was like, ‘Hey honey, aren’t you looking for a snapper.’ He was like, ‘Heck yeah, this guy is good.’ So we started talking and they looked at my video and found out that I would be a good fit with them.”

Six days later on Dec. 7, he had an offer from Tulsa, which was in need of a snapper. He also had weekend visit set up for this past weekend to the private school in Oklahoma with roughly 3,700 students.

“I saw the campus and met all the coaches and players,” Cook said. “It was a fun experience. It solidified that I wanted to go there.

“I really liked how the campus was a smaller student body so everybody knows everybody and that is something that I like. The facilities were top notch and everything was close to the living areas. I liked that too.”

The Golden Hurricane signee said he believes he has a shot at playing time as soon as he steps on campus. Tulsa’s starting snapper from this year is graduating.

“They have one other snapper who is a freshman who I think is a walk-on and they made it sound like I had a pretty good chance of starting as a freshman,” Cook said.

In addition to his long snapping duties, Cook was a big-play specialist on defense for Dothan with 10 quarterback sacks over 45 tackles this past season. He also competed in baseball and track at the school, participating in the javelin at the state meet last spring.

Sent weekly directly to your inbox!