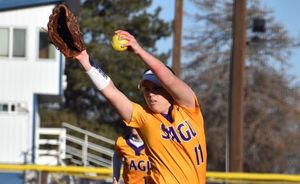 In game two of the day Ashlyn Teran pitched a gem, going seven innings and striking out six while only walking one. As a team, the Lady Lions totaled eight hits in the game led by Sarah Sanders who went 2-for-3. Illeana Salinas and Rosie Guadarrama each had a double, while Teran’s single in the fifth inning gave SAGU the 1-0 lead, scoring Airiana Magdaleno.

The Lady Lions will now face Oklahoma City again on Thursday, April 14, in a doubleheader starting at 2:00 PM in Oklahoma City.