First Zynga’s acquisition by Take-Two, then the $69 billion mega-deal between Microsoft and Activision Blizzard King, and now Sony buying Bungie, the developer of the popular shooter / massively multiplayer online game hybrid Destiny 2, for an estimated $3.6 billion: 2022 is already shaping up to be a tumultuous year in the video gaming industry with major players expanding their portfolios and ramping up their in-house studio expertise. When it comes to bringing video game developers under their umbrella, Microsoft leads the pack – even more so if the Activision Blizzard King acquisition passes antitrust scrutiny by the FTC.

As our chart shows, the successful closing of the deal would bring the number of Microsoft-owned game studios to 32, with 17 of them being acquired over the last two years. While this number may seem high, it’s the result of two big package deals. Activision Blizzard King itself is the parent company of nine studios. ZeniMax Media, which Microsoft bought in 2020 for an inflation-adjusted $8.7 billion, encompasses eight studios, including Bethesda Game Studios, which is known for its hit franchise Elder Scrolls, and Doom developer Id Software. While Electronic Arts might not be a direct competitor to giants like Microsoft, Sony or Tencent when it comes to revenue, it nonetheless also bought 21 game studios over the years, the latest one being mobile game developer Glu Mobile, which it acquired for $2.4 billion in 2021.

As far as the biggest names in the business go, Nintendo has the least direct subsidiaries or first-party studios. Only seven companies work under the parent company umbrella, although Nintendo EPD is split up into ten production groups developing games like The Legend of Zelda: Breath of the Wild or Mario Kart. Tencent, on the other hand, acquired 14 studios since its inception, focusing heavily on online games. This is apparent in acquisitions like Turtle Rock Studios, developers of the multiplayer shooter franchise Left 4 Dead and most recently Back 4 Blood, as well as Riot Games, who is responsible for League of Legends, one of the world’s biggest eSports titles.

Sony’s acquisition of Bungie hints towards one of the biggest trends in the video game industry: The focus on live service games, meaning multiplayer games that continually receive more content updates over many years and require no subscription fees to play but rather periodical purchases of content packs or “seasons”. This way, even older games can continue being monetized and the ensuing community building entices players to stick with one game instead of looking for alternatives. This strategy is corroborated by Sony itself. “Bungie’s successful track record in multi-format publishing and live game services will assist us in realizing our ambitions to take PlayStation beyond the console and increase our potential audience”, says Sony Interactive Entertainment CEO Jim Ryan. Viewed from a different angle, this could also be seen as a sort of payback: Bungie is the studio behind the first games of the Halo franchise and was wholly owned by Microsoft until 2007. 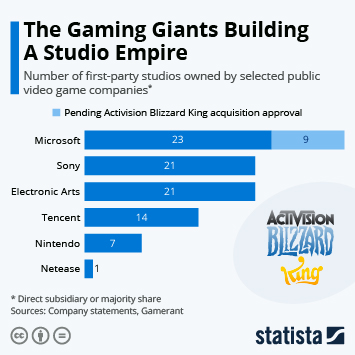 Get in touch with us quickly and easily.
We are happy to help!